Katarina Benzova is GN'R official photographer since late 2010. Originally from Slovakia, after 11 years working as a model, she started holding the camera for Guns N' Roses. We had the chance to ask her a few questions for GN'R France after the American leg of the tour. Katarina talks about being a photographer for GN'R, the music she likes, what kind of cameras she uses, etc.

- Hello Katarina, could you tell us a little about yourself, what did make you switch from being in front of the camera then behind the camera?

Now I see modeling being my stepping stone to learn photography and learn how to survive in this crazy business :) I was always into art and photography and in modeling world I was surrounded by it in daily basis for 11 years. It was just about a time when I would switch.

- Does your previous job help you to know when to take the right pic? Does it influence your work?

Kind of. I guess you have to have an eye and a bit of talent, you cant just learn it. Otherwise everyone will be a photographer :) It helped me to shape my personality, travel world and meet amazing people. Made me see the world from different kind of view, so I guess it influenced me :)

- What kind of camera and lenses do you use?

I have couple of film cameras, but it will be impossible to shoot concerts with it nowadays with the amount of shows we have. I use Canon 5d mark II with Canon 24-70mm and Canon 70-200mm L series lenses for concerts.

- On your Twitter account, you mention being a bit of a "crazy minded" person. Has the GN'R tour made you more "stable"? ;) 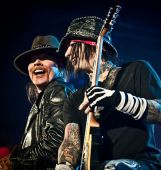 - You mentioned working for other bands, for instance GN'R's opening acts: KoRn (great pic of Jon Davis on your site!), Buckcherry, Bach...Is there an artist or band you'd really like to shoot besides GN'R of course?

For example AC/DC, Aerosmith and many more. But I don't have exact preferences. When I see great artist with great personality then I wanna capture it and get that character and feelings into a picture.

- How long have you been the band's official photographer? Did you shoot any full band's studio pic that will be released (none exists yet!)?

- You live with the band offstage and onstage, what's the most  exciting part of the experience, any cool moments you could share with the fans?

Everything is great and exciting when you are surrounded by amazing people. Its way too many cool and funny moments. Wouldn't fit this article :)

- You are originally from Slovakia. GN'R didnt play there yet but were in Prague in 2010, not really far away. How was it to be so close to home and be part of the whole tour?

I wasn't part of the tour yet then. But I was at the concert as a guest. And it was a lot of fun. 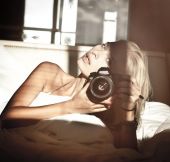 - Were you part of the French tour in 2010? We attended the shows here and the crowd was amazing. What was your experience of the concerts here, do you have any memories about ﻿the European tour to share with us?

Sadly I wasn't with GN'R in France. I joined them in Spain. European audience is amazing. Us Europeans really know how to enjoy great music to the fullest :)

- I guess you can't really talk about future projects, tour books, etc. but will you be able to release more pictures you took in the near future? (on your Facebook page or other sites for instance, besides gunsnroses.com)

- Could you tell the fans about a misconception they may have about Axl or the band? You mentioned talking about art with Axl for instance, what kind of art does he like?

The people that are talking badly about Axl or the band are the ones that never met them. How can you judge someone without knowing them? All of them are geniuses in their work, super talented and amazing. Really caring, honest, big hearted people. And I'm really honored to be working with them.

- What kind of music (artists, bands) do you like to listen to when you have some time to yourself?

Depends on my mood. I love classical music like Debussy, Bach or Rachmaninov. But as well listen to indie and rock. And when I'm DJing I play house music.

- Is there a shot you are especially proud of since you started working with GN'R?

- Katarina, thank you very much for your time, could you tell us something in French for the fans on our site? :)

Thanks to Katarina for her time and for being so nice and kind ! Don't forget to check out her web site : www.KatarinaBenzova.com. GN'R pics by Katarina Benzova.
Interview by Will for GNRFrance.net. Please do not use without permission.